Inside the weird world of the 'webcam girls': Posing in fake bedrooms, the Romanian students and office workers stripping for the camera and earning up to £26,000 a month
By: Olivia Foster February 6, 2015 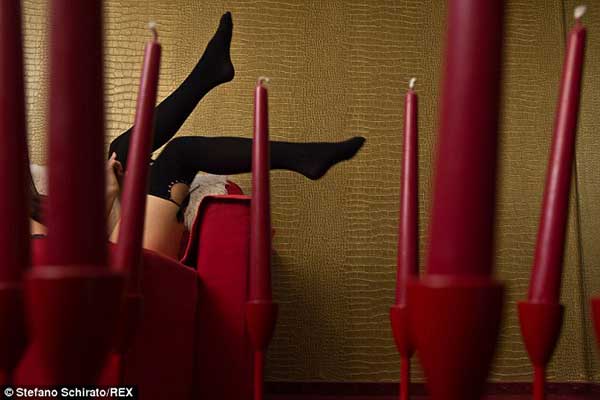 A startling new photo series by Italian photographer Stefano Schirato has revealed what life is like for Romanian 'webcam girls.' Working in Bucharest these women spend their days stripping inside ready made bed-rooms, draped in lingerie chatting to their anonymous online benefactors. It's a growing industry and little wonder as Stefano, who pictures the women going about their intimate business, reports that they can earn up to £26,000 a month. One of the women featured, a blonde nicknamed Honey Celine is pictured lounging in one of 15 staged bedrooms operated by company Happy Studios, a keyboard rested at her finger tips. As a former secretary Honey found she could earn very little money in her office job, turning to stripping on camera in November 2013. She says she is a student who uses the money she earns each month to fund her masters. Another performer Amber Gray 24, is married. Similar to Honey she turned to cam work when money became tight for her and her family. Amber has been working for Happy Studios for two years, in the full knowledge of her husband. A gallery of the studios shows simple rooms, sparsely decorated with simple duvets, cushions and small pieces of art. In Stefano's photo series one girl, Cameron, is seen smoking during a break from performing. She is a 21-year-old model and student. Stefano reports that she is shy and seems embarrassed by her job, she's been working at the studio for eight months earning less than some of the other performers at $7,000 a month. Stefano catches one girl named Denisa during a performance on her webcam. He notes that she performs as if her audience are in the same room as her, walking around the bed and chatting to her online fans. Denisa is currently earning $15,000 dollars per month but she hopes that one day she will be on the top percentage of earners, taking in $40,000 (£26,000) a month. During her performance Denisa is captured rolling around on a bed spread, a fluffy feather bower sits on the bed behind her as she entertains her audience. In another photograph she is seen dancing around a pole, the Romanian night sky dark outside her window. The pictures offer a unique insight into the lives of these women. In one picture of their down time the performers are seen sitting in a lounge like room playing on their phones. Stefano claims that the women seem friendly with one another, they sit and chat among themselves smoking and relaxing. The Happy Studios website reports that they have over 300 women performing for them and they have amassed over 15 years of experience in the industry. Each room in the Happy Studios complex is equipped with a camera and a large screen TV so that the women can see themselves as they perform. The clients pay for each minute they spend talking to the models with the women choosing who they wish to speak to. Whilst the nature of their conversations is often erotic, Happy Studios reports that many punters with to chat about normal things such as movies and books. To see the photos and read more, click: Daily Mail